View source
watch 02:56
Doctor Strange in The Multiverse o Madness - The Loop
Do you like this video?
Play Sound

Aisha Robinson is a former bullied student who joins the Cobra Kai Dojo, becoming the second student of the new generation of Cobra Kai. She is a supporting protagonist in the first 2 seasons of Cobra Kai.

She has a father who was a famous athlete. Both she and Sam were friends when they were younger, but at some point, Sam befriended the popular crowd which strained their friendship, though the two are still on good terms. Outside of Sam, Aisha doesn't have any known friends. Aisha is often bullied because of her weight, and for a lot, her looks (for Yasmine and her clique, it is not looking like a Barbie doll). Another factor in Aisha's life is that her father is not pushing her to relive his sports career, instead nurturing her own interests, at one point praising her for creating a robot. While it is positive for her to have supportive parents, her interests are usually not shared among her peers and further push her into the outskirts of the school cliques. Aisha's aptitude also gained the attention of Daniel LaRusso, who believes she was more of a true friend and better influence on his daughter than her later clique, even wishing that Samantha was at robot camp with Aisha instead of partying at his home.

Aisha's father is a famous athlete, yet she is not known for her prowess in sports. This is something she struggles with, exacerbated by being often bullied, particularly by Yasmine and her friend Moon (to an extent). She used to be friends with Samantha LaRusso. While they are no longer friends, they seem to be on good terms. After finding Johnny Lawrence's Cobra Kai Dojo she decides to join. Cobra Kai has never had a female student, and Johnny at first is not keen on her joining, and in his words, says it is akin to how the army doesn't accept girls, though he did see about testing her by having her fight Miguel Diaz in a sparring match. She managed to land a knee drop to his ribs and spear his midsection, earning Johnny's praise that she had untapped potential, or "a natural Cobra". Even Miguel was shocked by this sudden attack, but his sensei brushed it off that in this case, anything goes, lumberjack style. It was unknown if she was friends with Miguel prior to this, but Miguel knew enough about Aisha and her family to the extent he privately convinces her sensei that she could be a faithful student if her father is paying for the lessons.

When the tables turn on Samantha after she finds out her boyfriend Kyler was a lying cheat, Kyler retaliates by slandering Samantha throughout the school, making her a pariah to everyone except Miguel. Aisha also unsympathetically turns her back on Samantha, figuring it served her right for her earlier ostracism. After finding about Yasmine's party, Aisha along with Eli Moskowitz, Miguel and Demetri crash the party. During the party, she and Moon make amends after Moon apologizes to her for bullying her, and she gets her revenge on Yasmine by giving her a wedgie, thus humiliating her in front of everyone. During the All-Valley tournament, Aisha reaches the quarterfinals where she loses to the defending champion Xander Stone. Following her loss, Samantha congratulates her. While Aisha is hostile with her at first, she seemingly forgives Samantha after she apologizes to her and tells her, her revenge against Yasmine was great. The two then laugh about Aisha's revenge against Yasmine. Aisha encourages her to get back into karate. After Miguel wins the tournament for Cobra Kai, Aisha along with the other Cobra Kai students cheer.

Despite forgiving Sam at the tournament, she still has somewhat of a grudge against her, even though Sam wants to fix their friendship. She is even mad at Sam when Daniel attacks the Cobra Kai dojo in his Miyagi-Do Karate commercial. She befriends Tory who is a new student in the Cobra Kai Dojo. During a pool party, Tory steals some alcohol and the two drink, much to Sam's disapproval, but when Sam accuses Tory of stealing her mom's wallet, the two get into a brief fight. Aisha is dismayed at Sam for making such an accusation without any viable proof.

During a party at Moon's house, Aisha approaches a drunken Sam and tries to tell her to stop drinking, who in turn accuses her of trashing the Miyagi-Do Dojo, which Aisha denies, and also states that Miguel had nothing to do with it either. She then tells Sam that Miguel returned Miyagi's Medal of Honor which shocks Sam. When Sam appears to be dizzy, Aisha shows concern for her, showing that she still cares for her.

The following morning, Aisha messages Sam asking her if she is okay, but unbeknownst to her, Sam's parents Daniel and Amanda see her message on Sam's computer. Outside the school building, she and Miguel voice their concern over hearing nothing from Tory. When Sam and Tory are fighting at school, Aisha tries to stop them, but when a boy attacks her, she fights back and beats him up.

Aisha is not seen after hitting the boy during the school brawl. She isn't present when Kreese takes over the dojo, possibly indicating that she has not sided with him, showing that she is possibly no longer a Cobra Kai student.

After the events of the school fight, Aisha's parents disenroll her from West Valley High School. They transfer her to a private school up north, separating her from Sam and the rest of her karate influences. Though season 4 later reveals that the West Valley High karate war wasn't why she moved, but rather, due to a job offering her dad had at the UCSB.

In the episode "Kicks Get Chicks", Aisha is visited by Sam in her new home in Santa Barbara. She has gained her weight back and quit karate altogether, though she has retained her lessons from Cobra Kai and uses it in a much less violent way, advising Sam to try to make peace with Tory instead of resorting to violence. It is also revealed that the reason why Aisha moved to Santa Barbara was not because of the high school brawl, but her dad had a job offer at UCSB. When Sam talks about her recent experiences, Aisha tells her that she needs to confront her problems on her own.

Aisha is kindhearted, responsible, and highly intelligent. Like the rest of the kids in Cobra Kai, her personality takes a dark turn once she starts learning the aggressive and merciless techniques of the dojo. However, Aisha seems to have not been affected by it as badly as some of the other students, such as Eli and Miguel, since she resumed friendship with Sam at the tournament. This suggests that Aisha may return to her old ways once again.

Despite being a nice and kind person, she has shown her aggressive side on occasions. Some examples include being rude to Samantha and not showing her any sympathy when she is excluded from the popular crowd, giving Yasmine a wedgie, and angrily lashing out at the defending champion after losing to him in the quarterfinals. Her aggression is generally a mirror of how she herself was treated, figuring Sam deserved to be ostracized as she herself was when the shoe is on the other foot, and giving Yasmine a wedgie in revenge for the Halloween prank. The only instance of this that was unrequited was her reaction to Xander Stone beating her fair and square in the tournament, which seemed to reflect poor sportsmanship.

She still holds somewhat of a grudge against Sam, though she does care about her which is evidenced in a party where she shows concern for a drunk and dizzy Sam. She makes a new friend named Tory who is new to Cobra Kai. When Tory steals alcohol, both of them are drinking, which shows Aisha was willing to break rules from time to time. However, unlike Sam nor Tory Aisha was not seen getting drunk, which also shows she exerted better self-control, likely only drinking a little. During Sam's and Tory's fight Aisha tries to get them to stop, which shows she knows that things are getting out of hand, though she ends up knocking out a boy who attacks her. Despite this, she still doesn't seem to be corrupted by the Cobra Kai mentality and John Kreese's teachings as negatively as Miguel or even Eli/Hawk or Kenny have.

After Kreese takes over the dojo, she is not seen training with him, possibly indicating she may oppose Kreese's methods. Another possibility is that her parents are aware of Kreese's takeover and refuse to pay her tuition any further in that they are unsure of Kreese or lack confidence in his abilities as a sensei; earlier having praised Johnny for helping Aisha discover her athletic potential.

Before training with Cobra Kai Aisha showed some penchant for brawling, taking Miguel down with a football tackle and a knee drop. After joining the dojo, she develops a simple but effective fighting style based on power and straightforward techniques. Her defense is solid and she's fairly quick on her feet.

Sam was Aisha's friend; however, their relationship is strained. Aisha and Samantha were friends before the series, but at some point, before the series, Samantha became friends with the popular crowd, who often bullied Aisha. While Sam's actions strained their friendship, they were still on friendly and speaking terms. Despite Yasmine bullying Aisha, Sam never stands up for Aisha, out of peer pressure. When Sam loses her friends and becomes an outcast, Aisha treats Sam as Aisha was once treated - by ignoring her. However, she forgives Samantha after she apologizes and approves of her revenge against Yasmine. Aisha also encourages Sam to get back into karate. Aisha is angered at Sam when Daniel disses Cobra Kai in his commercial for Miyagi-Do. When Sam accuses Tory of stealing her mom's wallet, Aisha is disappointed at Sam for making an accusation without proof. During a party at Moon's house, Aisha tells Sam that Miguel returned Miyagi's Medal of Honor which shocks Sam. When Sam appears to be dizzy, Aisha shows concern and the following morning, she messages Sam, asking her if she is alright. Sam visits Aisha in Santa Barbara to get some advice from her due to Tory coming back to West Valley High after having been expelled - something Sam isn't ready for. Aisha explained how she had a friendlier approach to her new classmates. She still applied Johnny's teachings when she moved but in a different way. She encourages Sam to confront her problems.

Johnny was Aisha's sensei at the Cobra Kai Dojo. When Aisha first wants to join the dojo, Johnny says no girls allowed, but has a change of heart after being persuaded by Miguel. After taking down Miguel, Johnny becomes impressed, and Aisha worked to ensure that he saw her as another student. After seeing how strong Aisha is, Johnny was more open to including female students in Cobra Kai. His teachings helped Aisha grow into a confident young woman, though she was forced to leave the dojo when her parents transferred her to a private school following the school brawl. 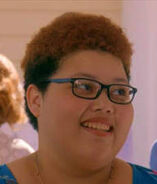 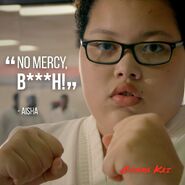