"So, have the man-boys filled you in about the whole "mortal enemy dojos battle for the soul of the valley" thing?"
―Amanda to Ali Mills[src]

Amanda LaRusso is a major character in the YouTube Premium and Netflix series, Cobra Kai. She is the no-nonsense wife of Daniel LaRusso and the mother of Samantha and Anthony LaRusso.

She is portrayed by Courtney Henggeler.

Amanda met and fell in love with Daniel LaRusso, and they married. She helped him achieve their mutual dream of establishing a car dealership, opening LaRusso Auto Group together. They had two children together, their eldest Samantha was born shortly after the couple established the Auto Group.[1] Several years later, Amanda had an unplanned pregnancy that gave them their final child, Anthony during "an incident on the mat".

"Hey, look, we all make mistakes. It's what we do next that counts, right?"
―Amanda LaRusso to Robby Keene[src]

She is stern, but also loving and supportive of her family, though she can sometimes butt heads with Daniel's mother, Lucille. She is also Daniel's business partner at LaRusso Auto Group.

She takes a stronger role in the partnership when Daniel turns his attention to running the Miyagi-Do Karate dojo. She fails to see what is fueling Daniel's rivalry with Johnny Lawrence, at one point remarking that the town is big enough for two dojos. As Amanda's first meeting with Johnny is decades after Daniel's encounter, she likely does not know the full story, and dismisses most of it as school hijinks. She also warns Daniel his attitude is spilling over into his professional life. Due to spending so much time at the Miyagi-Do dojo, Daniel has missed multiple business meetings. A key point in friction, but still not yet to a boiling point, comes when Daniel is so fixated on teaching a lesson in a meat locker that he blows off a lunch date with Anoush, one of his best employees. Daniel sees cell phone calls from Amanda and Anoush, but silences them both. When Daniel finally arrives at LaRusso Auto, he is sternly told by Amanda that Anoush has been headhunted away by rival car dealer Tom Cole, and Daniel's no-show at the lunch date was the last straw for Anoush. Amanda warns all this may cost Daniel his business, and ultimately their family's livelihood.

Amanda is the constant voice of reason in the series. She is a very wise, grounded, and practical person, and can de-escalate conflicts with a few well-chosen words. Little is known about Amanda's background. When talking to Daniel about Sam's new popular friends, she implies having been unpopular at school. It's possible that her parents are either dead or live far away, as when Amanda tells Aisha that Sam is with her grandmother, Daniel immediately knows she is referring to his mother.

In the Season 2 finale, Amanda takes a tougher stance against Daniel. When Samantha is hospitalized, she threatens to have Tory expelled from West Valley High School. Samantha says her concern is for Miguel Diaz, who is also hospitalized for an undetermined spinal injury. After the doctor diagnoses a broken rib and recommends Samantha undergo X-rays to determine other injuries, Amanda is fed up with all the fighting. She puts her foot down by saying "No more karate!" forcing Daniel to abandon his masterminding of Cobra Kai's demise, as well as have the Miyagi-Do dojo close up shop. 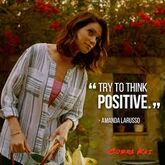 Retrieved from "https://thekaratekid.fandom.com/wiki/Amanda_LaRusso?oldid=18932"
Community content is available under CC-BY-SA unless otherwise noted.