"Johnny give up, he got his account!"
―Bobby Brown to Johnny Lawrence[src]

Robert "Bobby" Brown is the quaternary antagonist and an anti-hero of the original Karate Kid. He is second strongest student in the Cobra Kai Dojo. Some even wonder if Bobby is stronger than Johnny. After 30 years, he is now a pastor.

Bobby joined the Cobra Kai dojo at some point where he befriended students Johnny, Dutch, Tommy and Jimmy, all of whom attended West Valley High School. In the 1983 All Valley Karate Tournament, he beat Darryl Vidal in the 3rd place match.

Bobby is Kreese's second-best student. Although one of Johnny's gang (as he trips Daniel at the first day of school soccer tryouts, prompting Daniel to ground-and-pound Bobby, thus getting Daniel kicked out of the tryouts), Bobby is seen as a more compassionate character than his friends, as he tries to stop Johnny from ruining the beach party, harassing Daniel, and doing further damage to Daniel during the fight alongside the South Sea apartments during the Halloween party (neglecting the other four members' rebuking and brushing off Brown's wishes).

During the Semi-finals of the tournament Bobby insists that he can beat Daniel fairly, but Kreese orders him to put Daniel "out of commission". Bobby protests that he will get disqualified ("But I'll be disqualified!"), possibly hiding how he thinks doing such a thing is unethical. Bobby reluctantly obeys Kreese by landing a kick to Daniel's knee, severely injuring him. After the kick, Bobby drops down and sincerely and profusely apologizes to a pain-writhen Daniel before being pulled off Daniel, and is disqualified. Because Daniel was unable to continue at that time, he was the only Cobra Kai matched against Daniel whom he did not traditionally defeat, although Daniel indirectly won that match on account of disqualification.

In the film's novelization, Bobby, remorseful for injuring Daniel and disgusted at not being able to fight him fairly, walks over to Kreese and throws his black belt onto the floor before quitting the Cobra Kai and leaving the arena.

In the parking lot confrontation following the tournament, Bobby defends Johnny from an angry Kreese, as does Tommy, who states that Johnny has apologized for his performance. When Kreese chokes Johnny from behind, Bobby and Tommy both attempt to intervene, but are assaulted by Kreese. Fortunately, Mr. Miyagi saves Johnny by defeating Kreese. Bobby, along with the other Cobra Kai members, likely left the dojo following the events after the tournament after seeing Kreese for the kind of man he really is, which explains why there aren't any students left at Cobra Kai.

Sometime between 1984 and 2018, Bobby was ordained as a pastor in a Christian church (which reflects his retention of morality, despite training under Kreese's vicious and unethical teachings). Although his marital status hasn't been discussed as of season 3, a wedding band is clearly visible on his left ring finger in several shots, like when he prays for God to forgive him before he sweep kicks Johnny in front of his congregation for example.

Bobby doesn't appear and isn't mentioned, but is shown in a few flashbacks

In the summer of 2018, Bobby along with Johnny, Jimmy and Tommy spend one more night together before the passing of Tommy. Like Jimmy and Tommy, Bobby is shocked when Johnny informs them that he not only reopened Cobra Kai but welcomed Kreese back into his life, which the three disapprove of. Bobby has no clue to why Johnny would do such a thing, only for Johnny to retort that in Bobby's job there is a "book that preaches a lot about forgiveness". The following morning Bobby desperately tries to get Tommy to wake up, only to start crying along with Jimmy when it is revealed that he is dead (Tommy passed away in his sleep).

During Bobby's sermon with the congregation at the church, a drunken Johnny disturbs his sermon and Bobby uses his karate skills on him to get himself up, much to the shock of the congregation. Bobby learns from Johnny that he cannot meet his son Robby Keene in juvie by himself because he is on probation for his bar fight. Bobby tells Johnny he will go with him to juvie to see Robby, and that the church can make a donation for Miguel's surgery. He also tells him to be there for both Miguel and Robby even if it doesn't work out. Unfortunately, the plan to visit Robby fails, as instead of going, Johnny stays in the hospital to be there with Miguel for his surgery turnout which angers Robby. Bobby tries to get Robby to talk and tell him what's going on (as he notices his bruises near his eye) so he could pass it on to Johnny, but Robby then leaves instead. Bobby isn't seen after this, but Johnny apologizes to him over the phone. Later on when Robby is doing research on Kreese, an article about a 1983 all valley tournament he finds states that Bobby beat Vidal in the third place match.

Similar to the Cobra Kai, Bobby bullies and harasses Daniel. However, unlike his other fellow Cobra members especially Johnny he is very compassionate, and knows when to draw the line. He frequently has to tell his group particularity Johnny to relax whenever things are going too far, and he shows remorse when he performs an unethical action, such as illegally kicking Daniel during the tournament. He, along with Jimmy seems to not partake in harassing Daniel that much.

34 years later Bobby is a pastor and spends a lot of time praying. Ever since his former Cobra Kai friend Tommy has been diagnosed with most likely some form of cancer, he has been praying more. When Johnny reveals that he has reopened the Cobra Kai dojo and Kreese is back, Bobby voices his concern and reminds him of what Kreese and Cobra Kai did to them, showing that Bobby still hasn't gotten over Kreese's unethical teachings and does not trust him. Bobby warns Johnny that Kreese will eventually betray him again. He still has his fighting skills as he is able to help Johnny fight against a group of guys causing trouble. He is distraught when Tommy dies.

When Johnny comes to Bobby, following Miguel's severe injury and Robby going to prison, Bobby comforts Johnny by telling him not to blame himself and that he needs to be there for Miguel and Robby. He also agrees to come with him to see Robby in juvie. This situation may imply that Johnny trusts Bobby the most among all his friends.

His attitude seems to be dryer than the other Cobras. When first being reunited, Johnny remarks how Bobby has gone bald and figured all that praying should have made him regain the long hair he had when they first met. Bobby chuckles and remarks "God does not work that way".

Despite changing for the better the most among his Cobra Kai friends, he hasn't completely shed his teenage self, as he does help Johnny and his friends fight off a group of guys causing trouble in a bar, and he himself kicks Johnny for showing up at his church drunk during his sermon with the congregation at the church. He also still holds a grudge against Kreese for the way he treated himself and the other Cobra Kai's when they were teenagers. 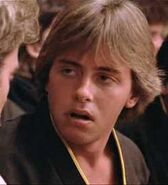 Retrieved from "https://thekaratekid.fandom.com/wiki/Bobby_Brown?oldid=22172"
Community content is available under CC-BY-SA unless otherwise noted.