Cobra Kai is an American comedy-drama web television series based on the 1984 The Karate Kid film series, created by Robert Mark Kamen. The first season premiered May 2, 2018 on YouTube Red. The television series takes place 34 years after the original film and follows the reopening of the Cobra Kai karate dojo by Johnny Lawrence and the rekindling of his old rivalry with Daniel LaRusso. The series was created by Jon Hurwitz, Hayden Schlossberg, and Josh Heald and stars Ralph Macchio and William Zabka reprising their roles as Daniel LaRusso and Johnny Lawrence from the films respectively.

The third season released on January 1, 2021. In October 2020, the series was renewed for a fourth season ahead of the third season premiere.[2] and a fifth season in August 2021.

Set thirty-four years after the events of the 1984 All Valley Karate Tournament, when a down-and-out Johnny Lawrence seeks redemption by reopening the infamous Cobra Kai karate dojo. The move reignites his rivalry with a now successful Daniel LaRusso, who has been struggling to maintain balance in his life without the guidance of his now-deceased mentor Mr. Miyagi.[3] The show is about two men addressing past demons and present frustrations the only way they know how: through karate."

Running parallel to the conflict are the story arcs of Johnny and Daniel's students. Johnny opens a new Cobra Kai dojo that attracts a group of bullied nerds and social outcasts who find a camaraderie and self-confidence under his tutelage, but there are some who take his aggressive philosophy too far, in particular his star pupil, Miguel Diaz. In contrast, Johnny's estranged son, Robby Keene, comes under the wing of Daniel, who hires the boy at his car dealership, initially not knowing that Johnny is his father. Daniel eventually proves a positive influence to the boy, teaching him Mr. Miyagi's philosophy of balance. Meanwhile, Daniel's daughter, Samantha, is caught in the middle of these conflicts as she learns who her true friends are and a better path to follow.

The series has been met with highly positive critical acclaim from both critics and the public at large . On the review aggregation website Rotten Tomatoes, the first season holds a 100% approval rating with an average rating of 7.29 out of 10 based on 22 reviews. The website's critical consensus reads, "Cobra Kai continues the Karate Kid franchise with a blend of pleasantly corny nostalgia and teen angst, elevated by a cast of well-written characters." Metacritic, which uses a weighted average, assigned the season a score of 72 out of 100 based on 11 critics, indicating "generally favorable reviews." Cobra Kai has been praised for combining throwbacks to the original films with fresh, new storylines, combining different generations and time periods as well as dealing with dark and serious themes.

Two versions of the Season 1 & 2 DVD were released. The first being a simple DVD set that includes the entire first and second seasons. The secon was a collector's edition DVD box set. The collector's edition had four discs, a two-sided headband in which Miyagi-Do's logo faced one side and Cobra Kai's logo faced the other. It also included exclusive uncensored bonus features and a slipcover. 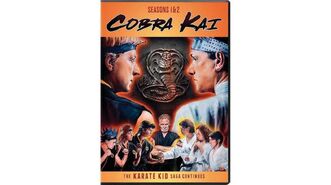 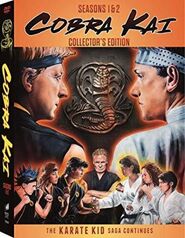 Fans of the Netflix series Cobra Kai can enter their favorite dojo with this debut box set of Cobra Kai action figures. The front of the box shows Johnny Lawrence and John Kreese in the Cobra Kai dojo, but open it up farther and see Daniel LaRusso in the Miyagi-Do Karate dojo! Each 7-inch action figure comes with interchangeable hands and display stands, and the box comes packaged in a protective sleeve. Figures sculpted by Chris Dahlberg and Rocco Tartamella. Package design by Jack Tsai Limited to 4000 pieces.

Sold by Toynk via Target. 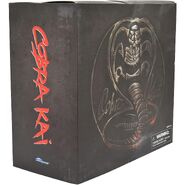 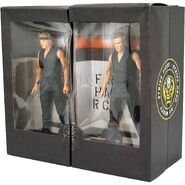 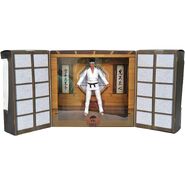 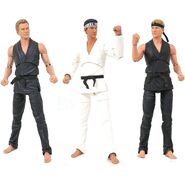 Does the team from the sewers of NYC the Teenage Mutant Ninja Turtles really have the chops to take down team Cobra Kai at the All-Valley Karate Championships and rule the Valley? 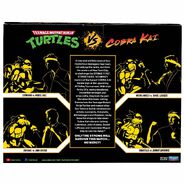 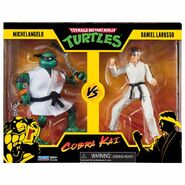 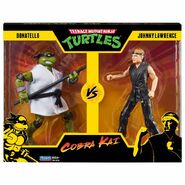 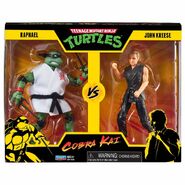 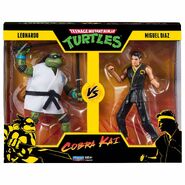 In anticipation for the fourth season release, The Loot Company partenered with Netflix and Sony Pictures Television for a limited edition crate series featuring officially licensed and exclusive Cobra Kai apparel and collectibles. It features three variations, so fans can choose from Cobra Kai, Miyagi-Do, and Eagle Fang.

Cobra Kai never dies! Get a badass mix of exclusive, officially licensed apparel and gear from the hit show delivered to your door every other month in this limited edition 3-crate series.

The Cobra Kai Limited Edition Crate Series is a one-time-only series featuring exclusives you won’t find anywhere else. Step into the dojo and bow to your sensei with items and gear that include everything you need to get you prepped for the All Valley Tournament. Each crate will cost $59.99 plus shipping that will be delivered to your door every other month starting in April 2022. 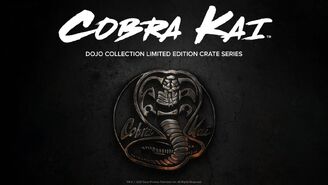 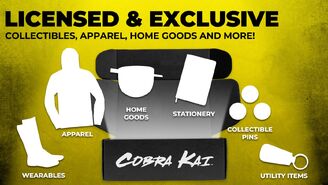 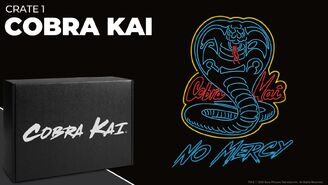 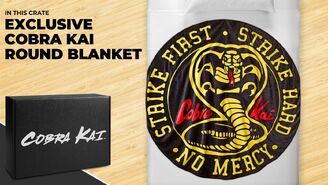 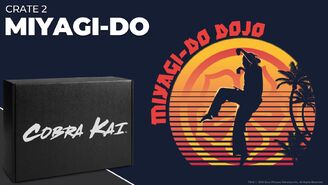 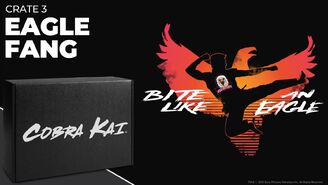 The following links redirect to the Fortnite Wiki.

The Cobra Kai Set adds 10 new outfits, each of which can be altered to represent the dojo of your choosing: Cobra Kai, Eagle Fang, or Miyagi-Do. The five male and five female outfits are available in two separate bundles for 2,000 V-Bucks ($20 USD) each. Alternatively, individual outfits can be purchased for 800 V-Bucks ($8 USD).

Accessories are also available, individually or in the Cobra Kai Gear Bundle! Display Mr. Miyagi’s teachings with the dynamic Teachings of Miyagi Back Bling, intimidate with the Cobra Coin Back Bling, promote the Cobra Kai Dojo with the Dojo Logo Pickaxe, strike with sharpness with the Cobra’s Curse Pickaxe, and believe that you’re the best around with The Crane Kick Emote. All the new gear can be purchased as a bundle for 1,500 V-Bucks ($15 USD), while individual accessory prices range from 200-800 V-Bucks ($2-8 USD)

Among the ten Outfits are Karateka Jones, learning karate to defend reality, as well as Heron Stance Hero, known for her honor. The Cobra Kai Set Outfits can be purchased individually or as part of the Karate KO and Dojo Showdown Bundles. 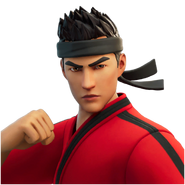 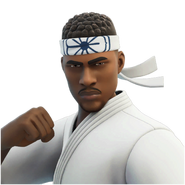 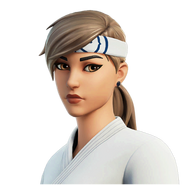 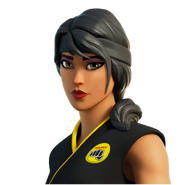 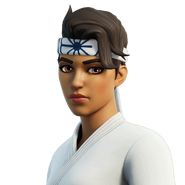 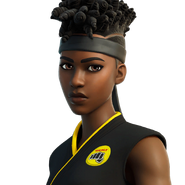 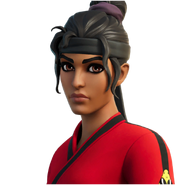 Fasten your Gi, Pley Beauty has entered the tournament…

Strike first with high impact pigments that flex to create bold looks or scale back for a perfect dojo to class finish with powerful yet clean ingredients for a fresh face and healthy skin.

The ultimate Cobra Kai™ collection that features our 4 special edition products that allow you to go from dojo to drama, plus our Karate Gi inspired tote bag with logo patch to carry these essentials. 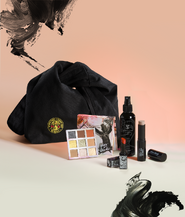 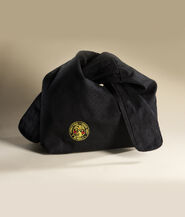 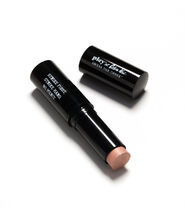 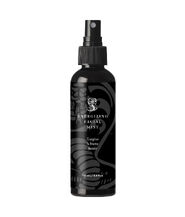 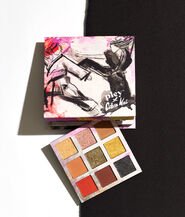 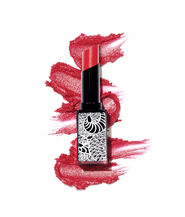 Enter the Dojo: The Music of Cobra Kai Live is a one-night only musical event hosted by series composersLeo Birenberg and Zach Robinson. The ticketed concert takes place on June 23, 2022, at the Troubadour. Vince DiCola, composer of “Staying Alive” and “Rocky IV,” will also give a special performance with his band at the concert. Becca Schack is set to serve as the house DJ. General admission tickets will be sold for $30 and will go on sale Friday, May 6, at 10 a.m. PT on the Troubadour website. There will be additional VIP ticket options for meet-and-greet opportunities with Birenberg, Robinson and DiCola.[8]