"COBRA KAI returns, and a new rivalry between opposing dojos is born. What was once a personal feud between Daniel and Johnny now escalates to engulf their students. But which path will they follow – Cobra Kai or Miyagi-Do?"
―YouTube Description

The Second Season of Cobra Kai is the follow-up to Season 1 of Cobra Kai, which is an American comedy-drama web television series based on The Karate Kid film series created by Robert Mark Kamen that premiered on April 24, 2019 on YouTube Premium, and it is currently a Netflix Original series.

The series was created by Jon Hurwitz, Hayden Schlossberg, and Josh Heald and stars Ralph Macchio and William Zabka, reprising their roles as Daniel LaRusso and Johnny Lawrence from the films. Season 2 received universal praise, as did the first season.

The second season takes place immediately after the events of Season 1 and follows the Cobra Kai Dojo's power struggle between Johnny Lawrence and his former sensei, John Kreese. Season 2 also expands on the plot of Season 1 further by exploring the growth of Johnny's son Robby and Daniel's daughter Sam, and their rivalry between Miguel and Cobra Kai newcomer Tory. 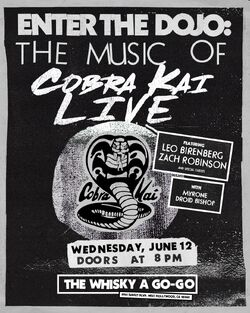 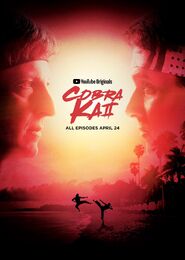 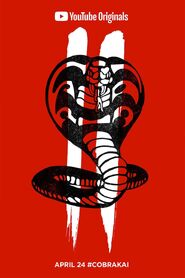