"I started Cobra Kai with one nerd. This is a step up. And if we're gonna be taken seriously, we need a name that commands respect. A name that elicits power and dominance. Cobras are strong. They may be king of the jungle, but the world's more than just a jungle. And there's only one animal... that can kill a snake."
―Johnny Lawrence[src]

When Johnny Lawrence loses his ownership of Cobra Kai to John Kreese, Johnny decides to start a new dojo to rectify the mistakes he made with his former students. Johnny opens Eagle Fang Karate as an alternative for Cobra Kai students who are still loyal to him and his methods of teaching. He struggles to find a name that has the same level of badass connotations as Cobra Kai, and enlists the help of his star student Miguel Diaz. Though their efforts are immense, they are unable to agree on a name. Johnny rallies some former Cobra Kai students and convinces them to try his new dojo, which he ultimately opens in a park due to a lack of funds. Miguel Diaz is the first student to join followed by Bert, Mitch, Dirk and two unnamed former Cobra Kai Students. Without a dojo, Johnny decides to host classes in the park and chooses an Eagle as their mascot as it's one of the only animals that can destroy a Cobra. When the students gather for lessons, Johnny tosses them t-shirts that reveal the name of his new dojo - Eagle Fang Karate. He brushes off the zoological inaccuracy that eagles do not have fangs, likely as he does not want to consider a new name, or has settled the naming aspect and wants to get on with the training. Johnny begins his student's training, helping them to learn that mercy is acceptable.

Thanks to Demetri, Miyagi-Do Karate and Eagle Fang form a truce as the larger enemy is Cobra Kai. The three dojos war when Cobra Kai attacks Miyagi-Do and Eagle Fang at the LaRusso home, ultimately ending with Miyagi Do and Eagle Fang defeating Cobra Kai, partly because of Hawk's defection from Cobra Kai. After the party, Johnny sees Miguel beaten up and learns about the fight and confronts his former sensei John Kreese. Daniel also learns about the fight and goes to confront Kreese as well. After a fight against Johnny and Daniel respectively, Kreese wages that the competing three dojos - Eagle Fang, Cobra Kai, and Miyagi-Do Karate - settle their feud at the upcoming All Valley Karate Tournament of 2019. Kreese proposes that the loser of the tournament will leave the valley, while the winner(s) are free to operate their dojos undisturbed.

The following morning, Johnny and Daniel decide to merge their respective dojos for the sake of training, to have the best possible odds of beating Kreese. They meet at Miyagi-Do's dojo, where the students are lined the backyard side-by-side. Johnny and Daniel lead the class together, bowing to their students and then one another. Daniel asks the students if they're ready and Johnny then says "Let's Begin!"

Johnny and Daniel begin co-teaching, but their differing personalities and styles, lead to difficulties early on. However, when the Miyagi-Do and Eagle Fang students build an Okinawan sparring deck, things start to look up. Things further look up when the two teach their respective karate styles to each other. However, when Daniel began spending time with Miguel, Johnny becomes jealous and wary of Daniel. After the return of Daniel's old enemy Terry Silver, Daniel tells Johnny he needs to take over training to beat him, but this angers Johnny and the two argue, eventually deciding to fight to determine who trains the students. The fight proves to be even, with Johnny even countering Daniel's pressure point technique. The fight ends in a draw, which then causes Daniel and Johnny to break off their partnership. Johnny leaves with Eagle Fang, while Daniel continues to train Miyagi-Do.

After learning that there is a separate boys and girls division for the tournament, Johnny and Eagle Fang look for a potential female. While they do appear to have success with Piper, she ends up joining Cobra Kai along with her other teammates. Fortunately, they gain a female named Devon. To prepare for the tournament, Johnny has them training against any dirty and aggressive tactics Cobra Kai may pull. In addition, he teaches Miguel and Samantha, the latter being Daniel's daughter and a Miyagi-Do student, the flying tornado kick. During the skills competition of the tournament, Eagle Fang is initially in second behind Miyagi-Do, but then they begin to struggle, which leads to them falling to 6th at the end of the competition. During the individual matchups, Miguel is the only one to make the semifinals. Devon makes the quarterfinals but is defeated by Cobra Kai student Tory, ending any chance of a woman in Eagle Fang winning. Miguel pulls a muscle in his semifinals match against former Cobra Kai and Eagle Fang and now Miyagi-Do student Eli, which leads to him getting medical attention. While Miguel appears to be recovering, he is hesitant to go back in. Johnny tries to pressure him to go back, but this leads to Miguel refusing to go back in, ultimately leading to Miguel being eliminated by default and Eagle Fang permanently being eliminated from the competition. Despite being eliminated, Eli wins the boys division. Heading into the finals of the girls division, Johnny and Daniel reconcile and both agree to help Sam. When Sam is down 2-1, Daniel advises her to use what she learned from both him and Johnny. Despite doing so, Sam would lose to Tory, making Cobra Kai the Grand Champion and the winner of the bet.

Much to the unawareness of Johnny and Eagle Fang, Terry had paid the referee to help Tory and Cobra Kai win, which implies that Sam and Miyagi-Do would have won had the referee been fair. Nevertheless, Eagle Fang placed 3rd overall in the standings.

Eagle Fang was designed as a way to avoid the toxic fanaticism in Cobra Kai. Keeping some of the offensive tactics but agreeing to only use them if the enemy strikes first, fighting with honor and ethics. It also seemed the way of training was more geared to specifically counter the aggressive style of Cobra Kai. Some students who quit or got kicked out from Cobra Kai will still have Kreese's tactics alongside Johnny's original teachings, making them powerful such as Miguel, Hawk, Mitch and Bert. Due to Johnny's lack of budget, he held the first training sessions on a public park where he used a Frisbee that his students had to kick.

After merging with Miyagi-Do, and failing to train together, Johnny and Daniel LaRusso agreed to exchange students and teach them their styles. Johnny took the Miyagi-Do students hoping for them to break away from their defensive style. He took the students to the top of a building and told them to jump from the roof of said building into another one, he also poorly placed a few mattresses in the ground in case the students fell. Due to the dangerous nature of the exercise, none of the Miyagi-Do students dared to jump until Samantha LaRusso, who managed to jump from one building onto the other one. Due to heated arguments between Daniel and Johnny, the alliance between Miyagi-Do and Eagle Fang quickly ended.

Knowing the kind of tricks Cobra Kai could pull at the All Valley Karate Tournament, Johnny tried to prepare his students to fight in spite of the dirty moves Cobra Kai students may use. Johnny tied one arm to the chest of each of his students so that they could learn fight with only one arm in case Cobra Kai popped one of their shoulders. During a sparring match between his students, Johnny threw dirt at Mitch's eyes so that he could learn fight with his other senses, though he seemly failed this test and knocked himself after hitting his head. Saying that no blow was too low for someone who fights dirty, Johnny had his male students lineup and made Devon, his new and only female student, kick them all in their crotch.

After a conversation with Miguel Diaz, Johnny showed him a watermelon that was hanging in the air by a chain and told him that he was gonna teach him the Flying Tornado Kick which was really hard to master. Samantha LaRusso then entered the Dojo as she wanted to learn more of the Eagle Fang style and Johnny agreed to also teach her the kick. 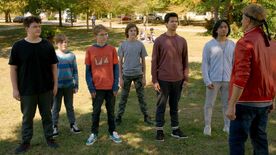 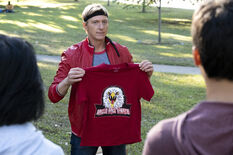 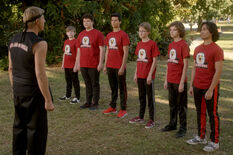 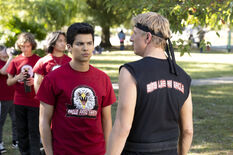 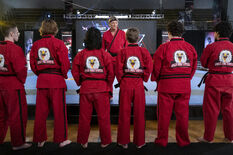 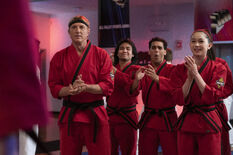