"Jenny and the kids send their love."
―Jimmy to Tommy[src]

Tony O'Dell
This page needs improvements!
The following content either has poor grammar/spelling, incorrect information, breaks one or more of our policies, or just needs sprucing up. Please evaluate the quality of the page in comparison to our guides and make the proper adjustments. Once the page is up-to-par, remove the {{improve}} tag. If you need help, contact an active Administrator.

Jimmy is a character in The Karate Kid. He was a student at the Cobra Kai Dojo and a member of Johnny Lawrence's gang. He returned in Season 2.

Jimmy joined the Cobra Kai Dojo at some point in his childhood/teen years, where he befriended Johnny, Bobby Brown, Dutch, and Tommy.

Jimmy is the most quiet member (having only a couple of lines in the film) and the only brown belt in Johnny's quintet group. At the All Valley tournament, he is the second Cobra Kai to lose to Daniel LaRusso, losing in the third round. Prior to the start of the semifinals, Jimmy is shocked when the teacher John Kreese says to put Daniel out of commission.

He is present when Kreese berates and chokes Johnny following his loss to Daniel in the tournament. While he does not attempt to stop Kreese, he shows disgust at Kreese.

Despite not being seen or mentioned, It is implied that Jimmy, along with the other Cobra Kai students, left the Dojo as a result of Kreese's actions following last years tournament.

It was unknown what career path Jimmy took between the years of 1984 and 2018, but judging by his attire of chinos and a button down shirt it is assumed he holds some type of office job or is self-employed in some professional capacity, such as an accountant. Jimmy seemed to have knowledge of the many escapades that Johnny and the other undertook from high school into the 1990's, and possibly was involved in these hijinks during those years. Prior to the events of Cobra Kai he married a woman named Jenny and sired at least two sons with her.

Jimmy isn't seen or mentioned, but is shown in flashbacks.

An older Jimmy along with Johnny and Bobby meet up with their dying friend and fellow former Cobra Kai student Tommy at the hospital. He presents Tommy with a bouquet of flowers, saying his wife Jennifer bought them. Jimmy voices his concern with the arrangements, and they all decide to spend some time together camping before Tommy's passing. Like Tommy and Bobby, Jimmy is shocked when Johnny says that he not only reopened Cobra Kai but also welcomed Kreese back into his life. He is quick to jump to Johnny and Tommy's defense when the barroom brawl breaks out, and surprises himself when his karate skills seem to still be there. When Tommy dies Jimmy is saddened, and possibly even in denial as he along with Bobby tell Tommy to wake up. He is next seen flagging down an ambulance, then standing with Bobby and Johnny in shock as EMTs haul away Tommy's corpse.

Jimmy is known for being the quietest member (having only a couple of lines in the film) and the only brown belt in Johnny's quintet group. Jimmy bullies Daniel along with his gang. However, he is shocked when Kreese tells Bobby to attack Daniel illegally during the tournament, showing he has a sense of knowing when things are going too far. He disproves of Kreese's disgusting and harsh treatment towards Johnny following the latter's loss in the tournament.

As an adult, Jimmy is concerned over Tommy's condition. When Johnny reveals he reopened Cobra Kai and Kreese has returned, Jimmy voices his concern. He is saddened by Tommy's eventual death. It also is apparent that he has a stable family with his own wife and sons, just like Daniel does with his wife Amanda and their children Samantha and Anthony and in contrast to Johnny's shaky relationship with Shannon Keene and abandonment of Robby Keene as his parent. 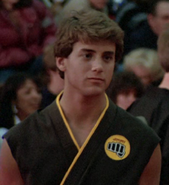 Jimmy in 1984.
Community content is available under CC-BY-SA unless otherwise noted.
Advertisement