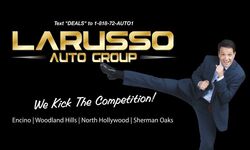 The LaRusso Auto Group is a chain of car dealerships located around Los Angeles, California.

It was opened in 2002 by Daniel and Amanda LaRusso, and they expanded to North Hollywood, Encino, Sherman Oaks, and Woodland Hills. They are known for their low prices and wide variety of cars including Mercedes-Benz, BMW, Audi, Acura and Porsche. Daniel often used a karate theme as a gag for the dealership, where a TV commercial was shown of Daniel "karate chopping" high prices. Johnny Lawrence privately found such advertising cheesy.

Through a turn of events, Johnny's Pontiac Firebird was totaled by an SUV driven by a distracted teenage girl named Yasmine, who was a friend of Daniel's daughter. The tow truck driver towed Johnny's car to the nearest autobody shop, which was the service bay of the LaRusso Auto Group. Mortified, Johnny attempted to retrieve his car to take it to a rival dealership, only to be discovered and reunited with Daniel. Daniel convinces Johnny not to take his business elsewhere when he offers to do repairs on the house, claiming a now-vintage automobile like his would be challenge to the service employees.

Some time later, Louie LaRusso, Jr., along with a group of bikers, had torched Johnny's car. When Daniel learned his cousin was responsible, he sought to make restitution to Johnny by giving him the keys and the pink slip to any car on the lot of the LaRusso Auto Group. Johnny ended up choosing a 2009 Dodge Challenger.

It later experiences difficulties with Tom Cole getting Doyona International to pull their contract. In an attempt to save his business, Daniel visits Doyona in Tokyo without success. Later, during a visit to Okinawa, Daniel is reintroduced to Yuna, a woman whose life he had saved when she was a young girl during his first visit to the island. Now the Senior Vice President of Sales for Doyona, Yuna helps Daniel to save his company.

It is presumed that Daniel and Amanda's Audi S7, S5 and Q5 were all purchased through their dealership, as well as Samantha's BMW 4. It is also mentioned that Mr. Robinson was sold an Audi Q5 by the dealership as well. Other vehicles sold include a Porsche 911, Subaru Outback, Dodge Challenger and 1993 Dodge Caravan.

Porsche 911
Add a photo to this gallery
Retrieved from "https://thekaratekid.fandom.com/wiki/LaRusso_Auto_Group?oldid=18582"
Community content is available under CC-BY-SA unless otherwise noted.