Candace Moon
Laura Lawrence was the mother of Johnny Lawrence and the wife of Sid Weinberg, as well as a minor, deceased character in Cobra Kai.

She is portrayed by Candace Moon.

During the first few years Laura did her best to try and raise Johnny on her own. But more and more the reality that she just wasn't going to able to give him the good life she wanted for him on her own just sunk in.

Laura was a kind woman who loved her son dearly and wanted the best for him. Much like Daniel LaRusso, Johnny would have been raised by a single mother had Laura not married Sid Weinberg, a wealthy yet inconsiderate businessman who clearly was only interested in her looks. Sid treated her son very poorly, but Laura deemed it important that Johnny grow up with more than she could give him alone. Laura was protective of her son and often stuck up for him whenever Sid berated him for his interests. Sid's churlish ways affected a young Johnny who turned to the head sensei of the Cobra Kai Dojo, John Kreese, for guidance. It's not entirely known if Laura even knew Kreese or saw the man in action with her son and his students.

After losing Ali as a girlfriend and later Kreese as a father figure, Laura ultimately became Johnny's sole source of love and support, as afterwards rest of the world viewed her son as a degenerate and a lost cause. Though it is unknown how their relationship changed in the years that Johnny grew older and his life went further downhill, evidently, Laura had been the glue that held the family together. When she died in 2002, the family disintegrated as only Johnny and Sid were left - they never considered each other family to begin with, and the already-poor father-son relationship devolved further into nasty hatred. Sid grew to detest Johnny even more, as prior to her death she made Sid promise that he would watch out for Johnny.

Johnny had been devastated by the loss of his mother, in particular because he had gotten his wife, Shannon, pregnant with their only child, and Laura died prior to the baby's due date. Although Johnny's decision to be a father was unrelated to his mother's passing, Johnny attacked himself for not giving Laura the chance to experience life as a grandmother and be there to see Robby's birth. It is apparent that Johnny loved his mother very much, as he keeps a framed photo of her in his living room alongside a picture of a younger Robby, and looks at both often.

Laura first appears in the first episode of Cobra Kai, "Ace Degenerate". She is seen in a photo and briefly mentioned by Sid. Laura makes her first actual appearance in a flashback in the sixth episode, "Quiver", where she argues with Sid about Johnny taking Karate classes when Sid berates him for his interest in the topic. Even if she spoiled him a little bit, she provided much needed love, understanding and encouragement to her son. She also did her best to protect Johnny from his abusive and uncaring stepdad. Johnny is seen cleaning off her photo and looking at it in his apartment in the eighth episode, "Molting".

Johnny tells his top student Miguel that Laura passed away right before Robby was born, and his depression over this is what led him to abandon his family. 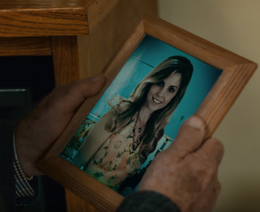 Sid looks at a photo of Laura in "Ace Degenerate" 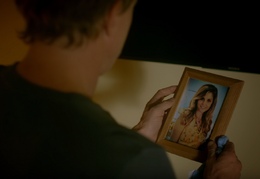 Johnny looks at the same photo of his mother in "Molting".
Add a photo to this gallery
Retrieved from "https://thekaratekid.fandom.com/wiki/Laura_Lawrence?oldid=18624"
Community content is available under CC-BY-SA unless otherwise noted.