"Listen to me. I cannot help you unless you tell me what's wrong."
―Lucille LaRusso[src]

Lucille LaRusso is the supportive yet traditional mother of Daniel LaRusso. She was a main character in the original Karate Kid trilogy and later appeared in the Cobra Kai web series. In all of the character's appearances, she was portrayed by Randee Heller.

Originally living in New Jersey, Lucille became a widow after her husband's death. In 1984, after Lucille got a new job in California, she moved cross-country and settled in Reseda. Despite her optimism over the move, Daniel was repeatedly bullied by Johnny Lawrence and his band of Cobra Kais. Although Lucille tried to help, she often found herself inadvertently embarrassing Daniel more. However, Daniel eventually managed to defeat Johnny at the All Valley Karate Tournament, much to Lucille's joy.

Lucille LaRusso was born on April 5, 1942. and when she grew up, she married to a man known as Mr. LaRusso in 1964. They had a son, Daniel born on December 18, 1966 and is their only child. At some point, when Daniel was 8 years old, his father passed away, leaving Lucille widowed and Daniel feeling guilty. Daniel and Lucille had to rely on one another during these tough times.

In 1984, Lucille got a new job in Reseda, Los Angeles, California. And her and Daniel moved cross-country. This was something Daniel was very bitter about because he was never asked if he wanted to move. Daniel began getting bullied at school, something that upset Lucille greatly, which is why he tried to hide it from her. Daniel tried to ask Lucille if he can take karate, and she replies he did so back in New Jersey. Daniel says not some annex program from the YMCA; rather a dojo. His first consideration is Cobra Kai school, but he tells his mother that place stinks, to which Lucille is glad Daniel is not interested in that as she could probably ill afford the tuition. Eventually Daniel took karate lessons from Mr. Miyagi.

Lucille is largely absent in this film because she went to New Jersey to take care of Daniel's Uncle Louie who has emphysema while Daniel and Mr. Miyagi were in Okinawa. She inquires about Kumiko and tells Daniel that the South Seas apartment complex is being converted into condominiums, which will leave them homeless and Mr. Miyagi unemployed. This leads to Miyagi and Daniel opening up a shop for Bonsai trees using Daniel's college fund.

In 2018, Lucille came with Daniel's cousin Louie for a family dinner at Daniel's house, and just like Daniel, she was appalled, at how the Cobra Kai was allowed to enter the all-valley tournament again. Lucille, remembering Daniel's experiences with Johnny's gang (Johnny Lawrence, Tommy, Bobby Brown, Jimmy, and Dutch), remarks that the "Cobra jerks" (referring to Johnny's gang) made life hard for Daniel. Samantha, who at the time, was dating a Cobra Kai, says that not all Cobra Kai students are mean (like Johnny's gang) and that Cobra Kai may change. Lucille rebukes this, by asking Daniel to tell everyone about how the Cobra Kai's pushed Daniel down a hill (referring to the scene in the original movie, when the Cobra Kai's forced Daniel off his bike and down a hill). She also gets in a heated argument with Daniel's wife Amanda about the importance of home-cooking, remarking that even after Daniel's father died, she always made dinner from scratch every night despite being a working, single mother. Amanda then voices her displeasure at Lucille for influencing Daniel to hire Louie to work for them at the dealership. However, with the help of Sam, they get past their differences, and Lucille is next seen teaching Amanda how to make her chicken cacciatore recipe that Daniel likes.

Lucille appears in the eighth episode of Season 2, Glory of Love, visiting her son's family and trying to help guide him through the dojo rivalry. She comforts him while he and Amanda are having marital problems. They also fondly discuss a day when they went with Daniel's late father to Coney Island.

Lucille doesn't appear, but is mentioned. After Daniel returns from Okinawa, he asks Amanda where their kids are, to which she says that they are with his mother.

Lucile returned in the Season 4 episode Party Time. Lucille was at Daniel and Amanda's house on her granddaughter's prom night out with Miguel Diaz. She told Daniel and Amanda that she was going to swap out the dinner napkins for something more appropriate, with Amanda letting her do what she wants. She learns that Anthony is grounded and asks what happened, but Daniel simply dismisses it and she and the rest of the families take a family photo before Sam and Miguel Diaz head to prom. 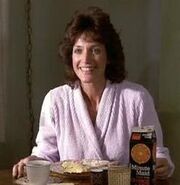 Lucille in The Karate Kid 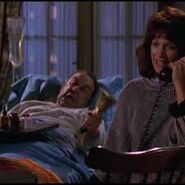 Lucille with Amanda, Carmen, and Rosa