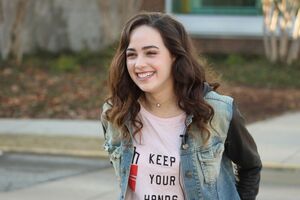 Mouser was born in Pine Bluff, Arkansas. She started her career at the age of five when she was chosen as a photo-double for Mel Gibson's daughter in Signs. She has two siblings, Aaron Parker Mouser and Laura Ashley Mouser, who are also in the acting business.

She was featured on the Starz Kids & Family series Eloise: The Animated Series as the voice of Eloise and appeared as the child-lead in the Hallmark Channel original movie A Stranger's Heart.

Mouser has done voice work for animated features such as Dragon Hunters, Tarzan 2, and Pompoko.

She also was a voice actress in the audio drama series, Adventures in Odyssey as Samantha McKay, younger sister of Grady McKay.

She has also appeared in guest starring roles on CSI: Crime Scene Investigation, Without a Trace, The King of Queens, Monk, Inconceivable, Scrubs, One Life to Live and had a recurring role on NCIS as Leroy Jethro Gibbs' daughter Kelly. She also had a series regular role in the CW series Life Is Wild as Mia Weller, for 13 episodes. At the 2006 Best of Fest Awards at the KIDS FIRST! Film and Video Festival, Mouser received the Outstanding Performance Award for her voiceover work in Eloise: The Animated Series. More recently she was on Lie To Me. Mouser also had a guest star role on Ghost Whisperer as the character Madison.

Mouser starred in the ABC medical drama Body of Proof as Dana Delany's daughter, Lacey Fleming. Mouser played the roles of both Savannah O’Neal and Emma Reynolds in the Disney Channel Original movie Frenemies, which was released in 2012.

Retrieved from "https://thekaratekid.fandom.com/wiki/Mary_Mouser?oldid=7766"
Community content is available under CC-BY-SA unless otherwise noted.