Mitch is a major recurring character in Cobra Kai. He is portrayed by Aedin Mincks.

He joins the Cobra Kai Dojo and quickly adopts it's philosophy, becoming a bully in the process, ultimately resulting in his friendship with Chris coming to an end and turning into a rivalry. He is much stronger than the regular fighter, but can easily be beaten by people who are more skilled, such as Tory and Chris.

Unfortunately, after being kicked out of the dojo for losing to a newly recruited Kyler Park, he becomes rejected by his former friends. He joins Eagle Fang Karate and later attends the first meeting of the combined Eagle Fang and Miyagi-Do Karate dojos, redeeming himself and rekindling his friendship with Chris and Hawk in the process.

He along with his friend Chris and several other teenagers join Cobra Kai, apparently after Cobra Kai's success at the All Valley Karate tournament, where both Hawk & Miguel excelled.

He trains under Sensei Johnny Lawrence and the latter's Sensei John Kreese. He gets exposed to Kreese's ruthless teachings. While Miyagi-Do Karate student Demetri is at the comic book store, Mitch along with other Cobra Kai students which includes Chris and Hawk surround him. Demetri tries to run away but Mitch along with the others surround him. However, Miyagi-Do students Robby Keene and Samantha LaRusso beat all of them up. Mitch is one of the Cobra Kai students that vandalize and destroyed Daniel LaRusso's dojo.

After Chris quits Cobra Kai along with some other students, Mitch becomes upset with Chris's decision to quit and ends their friendship.

Mitch fights Chris during the school brawl. He is eventually is able to kick Chris to the ground, but Chris wins the fight by clubbing him on the head with a school book.

When Johnny goes back to Cobra Kai and sees Kreese teaching a handful of his students, Mitch is one of the students present, indicating that Mitch has turned against Johnny.

Mitch remains in Cobra Kai under Kreese's control. He even has a haircut this season. He remains a close friend to Hawk throughout the first half of the season. After Hawk finds out about Miyagi-Do hosting a car-wash to raise money for supporting Miguel's surgery, Mitch helps Hawk to confront Nathaniel. Mitch comments that the money will be donated in the name of Cobra Kai. The duo then proceed to beat him up and take the money with them.

Later on, Mitch can be seen with Hawk, Mikey and Doug, causing havoc in the local arcades. The group ends up breaking into a nearby laser tag arena to drink beer, where they are attacked by Miyagi-do students. Mitch ends up fighting Chris and initially finds himself on the losing end. However, as Tory arrives with Big Red and Edwin to help, Mitch manages to get help from Doug. The two eventually defeat Chris together.

When Kreese brings new recruits to Cobra Kai, Mitch attempts to mess with newcomer Kyler, by insulting him, but quickly gets scared and backs away when Kyler snaps at him. When class starts, Kreese orders Mitch and Kyler to spar. At first, Mitch lands a kick on Kyler just for fun, most likely in an attempt to scare him and gets a point. Kyler then warns Mitch that he will beat him. Mitch, on the other hand still underestimates Kyler. He starts to throw basic strikes and kicks (he kicks after throwing a few strikes) at Kyler, but Kyler keeps dodging them. Kyler then uses Mitch's second kick to get the upper hand, grabbing on to his leg while Mitch's kick was in the air, and then throwing Mitch down to the ground. Kyler then locks Mitch with a choke. Mitch taps out and Kyler lands a final punch to him, losing in the process. Kreese responds to the loss by kicking Mitch out of Cobra Kai. Mitch looks at Kyler and Brucks in shock and Brucks mocks him by going on a fake fighting stance. He then looks at Hawk with desperation, implying that he wants Hawk to defend him. Hawk then protests Kreese's decision, stating that Mitch has been loyal to the dojo, but Kreese states that Mitch is not Cobra Kai material.

After being kicked out of Cobra Kai, Mitch finds himself rejected and mocked by Hawk and his former classmates, but shortly afterward, he joins Johnny's newly-founded Eagle Fang Karate along with Miguel, Bert, and a few others. Mitch is present when Kreese and the rest of Cobra Kai confront Johnny during their training, offering Johnny a last chance to re-join the dojo.

Mitch gets invited to the LaRusso house along with the rest of Eagle Fang to discuss working together with Miyagi-do against Cobra Kai. Mitch protests the offer at first, but Demetri manages to convince him that it would be for the greater good. The meeting is attacked by the Cobra Kai students, and Mitch helps defend the house during the ensuing brawl. He spends most of the time fighting Mikey, and overall has the upper hand. However, he is later seen being beat up by Paul, and then fighting Doug. In the end, Mitch and his side prevail, due to Hawk defecting and joining his side, as well as Miguel beating Kyler, who was the only other minor threat, with Hawk and Tory being the only major threats during the fight. He is last seen fighting with Doug.

Following the house fight Mitch is present as Miyagi-Do and Eagle Fang join forces. Mitch and Chris can be seen shaking hands and putting an end to their rivalry, as Mitch takes his place in formation to start training under Daniel's and Johnny's guidance.

Mitch is also training for the All-Valley tournament. He is then ordered to spar with Bert, but is distracted, allowing Bert to kick him twice. While sparring against Hawk, he does appear to be losing but managed to land a hit on Hawk before their match is halted with no winner.

He also watches Daniel and Johnny's rematch, but after realizing that the merge didn't work, Mitch leaves with Johnny.

While waiting for their female recruit Piper, Mitch corrects Johnny about how long they've been waiting, but when Johnny turns around, he stops talking. However, they learn that Piper joined Cobra Kai, upsetting them. Fortunately, they get a girl named Devon to join. During one of their training sessions, Mitch is sparring with another student, but when he gets sand thrown in his eyes, he ends up hitting his head on a shelf. On one occasion, he is kicked in the groin by Devon. After the session, he is upset with Miguel for being a co-sensei.

On the day of the All-Valley, Mitch is participating in the skills competition. He demonstrates his skills with a bo staff, but ends up throwing it to the judges. It is unknown if he participates in the individual one on one matchups, but if he did, then he would have been eliminated at some point before the quarter-finals presumably by Cobra Kai, Miyagi Do, or a different dojo. Despite Eagle Fang being eliminated from the tournament, he still watches the matches and joins Miyagi-Do after Daniel and Johnny reconcile and team up for Sam and Tory's match.

Shortly after joining Cobra Kai, Mitch is corrupted by Kreese's teachings, which makes him vicious, aggressive and a bully. When his friend Chris quits Cobra Kai, their friendship ends. During the school karate war, Mitch has no problem attacking Chris but ends up losing to the latter. By the end of the season, Mitch along with several other students have turned against Johnny and become Kreese's students. He causes trouble alongside his friends, such as taking the money for Miguel's surgery from Nathaniel and beating him up. However, after being kicked out by Kreese for losing to an untrained Kyler, leading him to be shunned and mocked by his former classmates, he joins Johnny's Eagle Fang karate dojo. After Eagle Fang and Miyagi-Do team up, Mitch and Chris reconcile.

Mitch's skills are rather limited. After joining Cobra Kai, he gains some decent striking ability and has enough power to knock down the larger Chris. Despite being an aggressive fighter, his offense is reckless and easy to exploit, while his defense is weak and easy to exploit. He has no ground game at all, tapping out immediately when Kyler locks him in a choke hold, and being taken out fairly easily by Chris during the arcade showdown. Although his defense isn't the best, his kicking skills are fairly impressive, as seen during the school fight and training with Miguel and Johnny after joining Eagle Fang Karate.

During his fight with Chris in the school fight, the latter's superior defense and solid offense gives him the upper hand, until Mitch eventually kicks him to the ground, though he would the lose when Chris smacks him with a book, which could indicate that Mitch's reaction time is slow. Due to Johnny's new teaching at Eagle Fang, Mitch was easily able to take out Mikey with good defense and offense.

When sparing Bert in season 4, he briefly loses focus when telling Daniel how the best defense is more offense, which leads to him being defeated by Bert. Shortly after, he spars Hawk and while Hawk appears to have the upper hand, Mitch lands a hit on him and the fight appears to end in a draw.

Mitch seems to also lose concentration and underestimate his opponents, which also adds up to one of his biggest weaknesses. During his match with Kyler, it was obvious that Mitch could have beaten him if he did not provoke Kyler for fun and then underestimate him. This is proven when compared to how he managed to skillfully almost beat Chris in the school brawl.

Joins Eagle Fang with Johnny Lawrence after being kicked out of Cobra Kai
Mitch.jpg 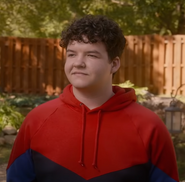