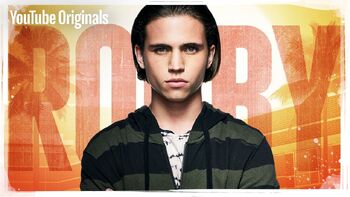 Tanner Buchanan is an actor, dancer, singer and model who has had recurring roles on several television series including Girl Meets World, The Fosters, Game Shakers, Fuller House The Goldbergs and Designated Survivor which lead to the main role as Robby Keene the son of Johnny Lawrence (William Zabka) in the Karate Kid next generational TV series Cobra Kai. Tanner has also been a part of many hit short films.

He received dance training from the Center Stage Dance Academy in Ottawa and he has a strong passion for music. Tanner can play several instruments including the guitar and piano and loves singing and songwriting.

Retrieved from "https://thekaratekid.fandom.com/wiki/Tanner_Buchanan?oldid=7430"
Community content is available under CC-BY-SA unless otherwise noted.