Tommy was the quinary antagonist of the original The Karate Kid. He was another friend of Johnny and was a student at the Cobra Kai dojo. He was known for being the most vocal of the Cobra Kai gang a trait shared with Dutch. However, a main difference in their choice of words was that Tommy was known for sarcasm, whereas Dutch was vituperative towards people and far more antisocial.

34 years after leaving Cobra Kai, a dying Tommy is shown to be much more calm and peaceful, though his sense of humor is still there. He spends his final day hanging out with his Cobra Kai friends and having his last conversation with Johnny, before peacefully dying in his sleep.

Tommy attended West Valley High School. While in his freshman year, he was assigned to the same homeroom as Ali Mills. He developed a crush on her, and joined Cobra Kai Dojo in the hopes of sharpening his athletic skills and asking her out. It is also highly possible that like Johnny and many other Cobra Kai members, that Tommy was a bullied loner at school and tried to become tougher and more popular by joining the Dojo. However, he never asker her out, as he learned she already was dating Johnny Lawrence. Eventually, the crush disappeared, and Tommy felt it best to not let a girl come between him and a fellow Cobra, now having valued the friendship he made with Johnny and the others. In the 1983 All-Valley Tournament, he lost to Johnny in the finals but put up a tough fight according to Johnny. He also upset Darryl Vidal in the quarterfinals/semifinals.

Tommy is first shown arriving at the beach on his motorcycle along with the rest of his Cobra Kai friends. When Tommy spots Johnny's ex-girlfriend, Ali Mills, he informs Johnny so he goes to talk to her while Tommy and the others follow him.

On one night when Daniel was riding his bike home Tommy and his friends approach him with their motorcycles and knock him down the hill. Tommy mocks Daniel for his earlier appearance at the Cobra Kai dojo, saying how he wants to learn karate. He was also is heard laughing derisively alongside Dutch when Daniel is shoved down the hill.

On Halloween night, Tommy is dressed up as a skeleton along with the rest of his friends. When he along with Johnny's gang are beating up Daniel outside the South Seas apartment complex, Mr. Miyagi jumps in and beats them all up.

After it is confirmed that Daniel will fight in the all valley tournament, his sensei John Kreese instructs the students not to bother Daniel until the tournament. The next day at school, Daniel openly taunts and makes fun of Tommy along with his friends because he knows they are not allowed to hurt him. Johnny almost attacks Daniel, until Bobby reminds him that they have to wait for the tournament. Tommy responds to Daniel's insults with "Must be take-a-worm-for-a-walk-week!"

He faces Daniel in the 4th round in the All Valley tournament. Despite managing to score a point against Daniel, Daniel is able to beat him. Following his defeat, he angrily walks away. He vocally expresses his support for Johnny during the semifinals and finals. Johnny however loses to Daniel in the finals.

Following Johnny's loss to Daniel, Kreese angrily berates Johnny and chokes him in the parking lot. Tommy tries to convince Kreese to calm down and let him go. When Mr. Miyagi intervenes, Tommy agrees with Miyagi's persuasion and orders Kreese to let Johnny go, but Kreese hits him. Fortunately, Miyagi saves Johnny by defeating Kreese.

It can be implied that Kreese's actions following the loss at the All Valley tournament caused Tommy and the rest of the Cobra Kai members to leave the Dojo for good.

Sometime between 1984-2018 Tommy was diagnosed with cancer and was hospitalized as a result. It is unknown when exactly this happened, but it can be implied that he was diagnosed prior to the episode "Take a Right".

While Tommy does not make an appearance, he is shown in a few flashbacks, and mentioned by Johnny. When Johnny talks to his student Miguel Diaz about Daniel, he references the time he fought Miyagi behind the South Seas Apartment Complex during the Halloween Dance, and even says he thinks Tommy suffered brain damage as a result.

"You still have time."
―Tommy to Johnny Lawrence[src]

During the Summer of 2018, Johnny receives a phone call from Bobby Brown informing him that Tommy is gravely ill and is not expected to live for much longer. Upon arriving at the hospital, the two former Cobras and Jimmy meet up with a dying Tommy. After a final day of drinking, fighting a group of guys causing trouble and riding on motorcycles like the four did in high school, they go camping in the mountains where Tommy spends his final moments talking with Johnny. Getting something off his chest, Tommy admits his crush on Ali years ago, which Johnny never knew of. The three Cobras wake up to find that Tommy had died peacefully in his sleep, saddening them. An ambulance later arrives and picks up Tommy's corpse, with medical officials putting him in a body bag.

Miguel also learned of what happens, and offers his condolences when Johnny returns from Tommy's funeral.

While doing some research on Kreese, Robby Keene finds an article about Cobra Kai in the 1983 All Valley tournament. In the article, it is states that Tommy lost to Johnny in the final, but upset Daryl Vidal in the semifinals.

Tommy was a bully just like the rest of Johnny's gang. He was known for being extremely vocal, as he would scream out of joy or anger from time to time. Despite his mean personality, he did care about Johnny, and even tried to persuade Kreese to stop hurting Johnny following the latter's loss at the All Valley Tournament.

Thirty-four years later, he is much more calm and peaceful. Despite dying, he spent his final moments happily reconciling with Johnny, Bobby and Jimmy. Like the rest of the old Cobra Kai members, he heavily distrusts Kreese. He renounced the sarcastic attitude of his youth, although a bit of humor remained.

During his last words with Johnny, he admits he is not much longer for this world and that Johnny has a gift from God that he does not. When Johnny jokingly remarks that the gift is "good looks," Tommy chuckles and replies with, "Besides that." Tommy seriously states that Johnny has health, as well as time; he then suggests that Johnny use the latter to either find a woman or make amends with Ali.

Tommy dies peacefully and ironically at the same time as he now ends up in the body bag. 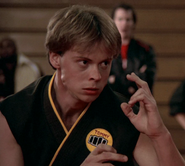 Tommy in 1984.
Add a photo to this gallery
Retrieved from "https://thekaratekid.fandom.com/wiki/Tommy?oldid=22245"
Community content is available under CC-BY-SA unless otherwise noted.