The Moment of Truth

"The world shows no mercy. So, why should we? Some people have it good, but the rest of us, we have to fight for every inch of what's ours. Not just to score a point. For everything."
―Tory Nichols to Miguel Diaz[src]

Tory Nichols is a recurring character in Cobra Kai.

She has been described as a troubled teen who speaks her mind and is willing to fight anyone who crosses her. Tory becomes a student at the newly reopened Cobra Kai Dojo. As soon as she arrives she starts a friendship with Aisha, becomes love interest of Miguel Diaz, and a rival with Samantha LaRusso. After falling victim to the ruthless teachings of her sensei John Kreese, Tory becomes ruthless, aggressive and vengeful. However, her actions lead to her being expelled, following a school brawl, where she severely injured Sam with her spiked bracelet.

Shortly after being expelled, she forms a bond with Kreese. Through this bond, she becomes more ruthless, aggressive and dangerous. She becomes one of Kreese's most corrupted students.

Tory was born on December 4, 2002. She explained to Miguel Diaz that she grew up very poor with her family, and her mother was a waitress that struggled to make ends meet. After work, her mother would often bring leftover food home from the restaurant so she could always feed her children. One night she was caught red-handed by the manager and fired for stealing from the job, despite the fact the food would have been disposed of anyway. This incident shaped her worldview and philosophy on life; that the world is a cruel and harsh place and one should react by looking out for one's self.

Tory first appears in The Moment of Truth. Tory already had kickboxing experience before joining Cobra Kai. Johnny then orders Miguel to take on "Little Miss Hotshot", and she impresses Johnny and John Kreese by using a skillful takedown on Miguel while sparring. She soon becomes friends with Aisha Robinson but develops a rivalry with Samantha LaRusso when the latter accuses her of stealing her mom's wallet.

She helps Miguel get over his breakup with Sam and ends up starting a relationship with him. However, after witnessing Miguel and Sam kiss she decides to punish Sam.

On the first day of school she threatens Sam over the intercom. When the two meet in the hallway she reveals to everyone that Sam and Miguel kissed and then viciously attacks Sam. Sam's boyfriend Robby Keene tries to intervene and diffuse the fight but Miguel believing he is attacking Tory attacks Robby and then a huge school brawl between the Cobra Kai and Miyagi-Do Karate Dojos occur. During the fight she kicks Miguel in the stomach because she was angry at him for kissing Sam.

She has the upper hand over Sam for most of the fight, but when Sam starts to get the upper hand, Tory fights more viciously, using her spiked bracelet as a knuckle duster. She injures Sam's arm with the bracelet, but is ultimately beaten by her after being knocked down the staircase. When Robby kicks Miguel off the railing Tory screams "Miguel" out of horror. After Miguel falls on the ground and is lying unconscious Tory and Hawk go to Miguel.

Later she is seen with Hawk, Raymond, Mitch and other students training at the dojo with Kreese as Johnny confronts Kreese telling him that she, Hawk, Raymond and others are now his students and that he owns the dojo now. It is evident that Tory along with the others blame Johnny for Miguel's injury and have betrayed him as a result.

Tory faces the consequences of her role as the instigator in the school brawl, and is expelled from West Valley High School. She is given probation as an alternative to juvie, as she is the primary caregiver of her sick mother. She takes on two jobs to pay the rent on time, which forces her to quit Cobra Kai. Her landlord propositions her an alternative for paying rent, and threatens to call her probation officer if she defends herself. It's clear Tory feels no remorse on hurting Samantha and putting her in the hospital and simply feels all this is the world making her life more miserable Sensei John Kreese approaches her one day to ask her to return, but she explains that she can't because of everything that's going on. Kreese realizes that the landlord is harassing Tory and threatens the man, who agrees to waive the rent for the month. This allows Tory to return to Cobra Kai.

When some of the Miyagi Do and Cobra Kai students are fighting in the arcade, Tory shows up with two other Cobra Kai's and angrily scream's Sam's name. After defeating Miyagi Do, she tells Sam to show herself. When Hawk has hold of Demetri's arm, Tory along with the other Cobra Kai's encourage Hawk to break his arm, which he does. At class the next day, Tory admits that she didn't actually think Hawk was going to break Demetri's arm. She then helps weed out the "unworthy" Cobra Kai recruits in a sparring match against a girl. The recruit lashes out at Tory for chipping her tooth, to which Tory says she needs braces anyway.

When Tory is in the probation office, she encounters Robby, who is angry at her for starting the fight. She rebuttals that while she started it, he ended it. She knows that it's unfair that they get probation while everyone else is scolded, and warns him that Sam will turn him, much to his anger. Before leaving, she tells Robby to check stable in the home life section, since they won't check. While staying at Cobra Kai, Robby is noticed by Tory who mocks him for trying to run away. She says channeling in the hate will make him stronger. Later on, Tory invites him to hang out with some of the Cobra Kai's. That day, the two along with Kyler, Hawk and some other Cobra Kai's break in the zoo, and Robby steals a snake for Kreese. After returning to the dojo with the snake, Kreese informs them about Miguel and Sam working together, angering both Tory and Robby. Kreese then dismisses the class, causing Tory to storm out.

After leaving, Tory along with seven other Cobra Kai's go to Sam's house and physically attack the Miyagi Do and Eagle Fang dojos, who had just formed a truce. She defeats one Miyagi Do student, before finding Sam, who runs away. Tory chases her into the Miyagi Do Dojo and starts attacking her. After kicking Sam, she picks up a pair of nunchaku and attacks Sam. She misses, and instead hits and breaks a photo of Mr. Miyagi. Sam, now angry and letting go of her fear, dodges Tory's attacks and picks up a bō staff. The two then fight, with Sam eventually managing to disarm Tory and corner her against the wall. Hawk, Miguel and Demetri then arrive, and Hawk tells Tory the fight is over. Tory tells Sam the fight will never be over, with Sam responding that she knows where to find her. Tory then calls Hawk and Miguel traitors, tells Hawk to watch his back, and turns to leave. Before she can go Demetri tells her that Hawk has friends who will watch his back for him.

"You seem like you already know how to kick ass pretty well. What do you need Cobra Kai for?"
"I've had a couple kickboxing lessons, but I've always wanted to smash boards blindfolded.
"
―Aisha Robinson and Tory[src]

Before joining Cobra Kai Tory trained in kickboxing. After joining the dojo she immediately demonstrates considerable aggression and some decent grappling techniques, performing a few takedowns and a joint lock during her match with Miguel. Her striking technique is a bit rough but she makes up for it with her natural strength, speed, aggression, and fearlessness, allowing her to hold her own against the more technically proficient Samantha. Tory is a ruthless fighter who is more than willing to use weapons against an unarmed opponent if she feels the need.

In Season 3 Tory's striking technique has visibly improved, making her even more formidable. During the fights she beats several Miyagi-Do students with little effort. She has also received some training with nunchaku, as evidenced in her fight with Sam in December 19. However, Sam's skill with the bo staff is still greater, allowing her to disarm and corner Tory before Miguel, Hawk, and Demetri break up their fight.

Kreese describes Tory as "a born fighter" in the episode Nature Vs. Nurture.

In season 2, there are two sides to Tory. In relaxed settings she is playful, fun-loving, and has a bit of a wild streak. She is assertive and has a sarcastic sense of humor. She enjoys being out with her friends as much as any teenager. She is openly flirtatious to Miguel, taking an interest in whatever he's doing and later, trying her best to help him get over Samantha.

Underneath that exterior, however, Tory believes that life is about fighting for what you see as yours, as she explains to Miguel in the episode "Take a Right", this philosophy has made her a good fit for cobra kai. She is highly vengeful if she feels anyone has wronged her. She can be a bully, particularly to Sam, whom she views as uptight, privileged, and worst of all, her competition for Miguel. After witnessing Sam and Miguel kissing she gets revenge the next day by threatening Sam over the school intercom, viciously attacking her, and resorting to dirty tactics such as cutting her with a spiked bracelet.

In season 3, Tory gets more corrupt by Kreese's mentality, which makes her more vicious than she was in season 2. Her fight against Sam in the season 2 finale haunts the latter so much, that she freezes when Tory calls out her name in the arcade. When she meets Miguel at a restaurant, she voices her disappointment in him kissing Sam, but becomes upset when Miguel says she needs help because she thinks he is calling her crazy. After Sam overcomes her fear and disarms Tory in their fight at Miyagi Do, Tory tells her that this isn't over, and even threatens Hawk, who has redeemed himself and joined the Miyagi Do's and Eagle Fang's.

In truth, Tory's an immensely angry and envious girl with contempt for society's rules and the way the world has treated her and her family in general. Tory also seems to put her resentments and grudges ahead of her struggling family. She also proves to be a corrupting influence on Robby. 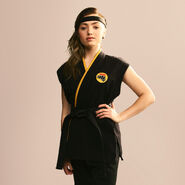 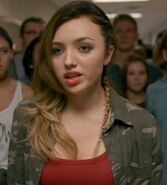 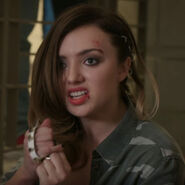 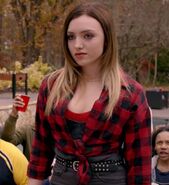 The world shows no mercy
Add a photo to this gallery 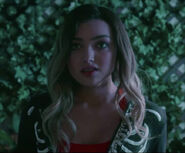 Add a photo to this gallery
Retrieved from "https://thekaratekid.fandom.com/wiki/Tory_Nichols?oldid=18966"
Community content is available under CC-BY-SA unless otherwise noted.