watch 01:50
Wiki Targeted (Entertainment)
Do you like this video?
Play Sound

"The Good, The Bad, and The Badass"

"After the whole, you know... front wedgie thing... I know what it's like. Sucks to have everyone laughing at you."
―Yasmine to Demetri[src]

At the beginning of Cobra Kai Yasmine is the prominent and popular queen of her high school. Over the course of season one, however, Yasmine's clique is dismantled and her status seriously damaged by students of the Cobra Kai dojo, culminating with Aisha taking revenge by giving her a front wedgie in front of a huge crowd of her school peers.

In season 3, she returns as something of an outcast, but her harsh attitude begins to soften as she realizes how it feels to be the laughingstock. She also surprises herself by developing an attraction to Demetri.

Little is known about Yasmine's upbringing except that she comes from a wealthy family. At some point, she became the spoiled and vindictive leader of the rich girl clique at West Valley High School. While not a physically violent person she was still a bully, preferring whisper campaigns and online harassment. She frequently victimized Aisha Robinson. She seemed to rely on Kyler and his pack of bullies to physically harass and intimidate her enemies when she felt the necessity.

In the episode Ace Degenerate Yasmine inadvertently sets Daniel LaRusso and Johnny Lawrence on a collision course after she crashes her car into Johnny's Pontiac Firebird in a parking lot. Johnny's car winds up being towed to Daniel's auto dealership for repairs, resulting in the two old rivals seeing each other for the first time in many years.

She is then seen in Strike First making spiteful comments about social outsiders Demetri and Eli Moskowitz. Later in the day she tells Sam and Moon that her father is going to buy her a new car due to the accident, after she lied to him that she hit a deer. When Samantha expresses guilt about not alerting authorities about the accident, Yasmine rationalizes that the dangerous-looking, scruffy man shouting at them was probably some "meth-head zombie" who would've chained her, Sam, and Moon up in his basement.

She bullies and looks down on the unpopular crowd, most notably Aisha due to her weight. Her most notable action against Aisha is posting a cruel pig meme of her eating Cheetos during the Halloween dance causing several people to mock her.

In Counterbalance, when Sam asks Yasmine and Moon why they have been ignoring her, Yasmine says because Kyler told them that Sam thinks she's better than them, though Kyler was lying to them. While Sam denies, neither believe her, indicating that their friendship is over. They also look down on Sam for going down on Kyler at the movie theater, which was another lie Kyler told them. An angry Sam then hints that Yasmine may be bulimic.

In Different but Same, Yasmine and her friends arrive at the canyon for her birthday party, only to find the Cobra Kai students and a host of uninvited guests from school already there. Flustered, Yasmine tells Kyler to get rid of them, but upon spotting Miguel in the crowd, he loses his nerve and suggests they find another spot. Yasmine is angered but Kyler is unconcerned. As Kyler leaves Moon joins the party and Yasmine reluctantly accompanies her. While at the canyon, she angrily confronts Aisha for ruining her party. Aisha counters that her friends were there first, causing Yasmine to insult her. She then demands that Moon leave with her, but Moon says that she is staying. She states that she has apologized to Aisha, and she suggests that Yasmine do the same. Enraged, Yasmine insults Moon and stalks away, but not before intentionally shouldering Aisha. Fed up with Yasmine's bullying, Aisha gets her revenge by giving her a wedgie so severe it lifts her off the ground. Aisha then drops Yasmine into the dirt, humiliating her in front of everyone.

Yasmine does not appear as she is evidently on vacation for the summer in France. She is mentioned in the episodes The Moment of Truth and All In.

Yasmine returns to school in Aftermath, but her former status is gone; Moon appears to be her only friend, while Nathaniel openly mocks her. While she maintains her mean exterior she starts to get to know Demetri in the episode The Right Path when they are partnered on a science project. When Kyler bullies Demetri by drawing a penis on his cast in the episode Obstáculos, Yasmine realizes she empathizes with him, especially now that she herself is a laughingstock. She later catches up with Demetri and signs the cast in such a way that makes it look like the two of them are together, turning Kyler's cruelty into a potential boost for Demetri's reputation. In the episode The Good, The Bad, and The Badass, Miguel Diaz and Sam catch Yasmine passionately kissing Demetri in the hallway at school, although Yasmine immediately denies that they are dating and hurries off in embarrassment.

Despite her consistently toxic attitude Yasmine is a popular student. Smug and arrogant, she picks on and looks down on people she views as low status, most notably Aisha, and to a good extent Eli and Demetri. Aside from being a bully herself she is openly amused by Kyler's bullying. She is easily manipulated at one point by Kyler, after he lies to her about Samantha saying she is better than her, indicating a possible deep-seated insecurity. Her popularity finally comes to an end when Aisha finally gets her revenge by giving her a wedgie in front of a huge crowd, making her a laughingstock in front of her classmates.

Yasmine returns in season 3, at first displaying her old attitude. However, she is no longer queen of the school, and is made fun of by the other students for the wedgie incident instead. After being partnered with Demetri on a school project, she begins to see him in a new light, and her personality begins to soften somewhat. After Kyler draws a penis on Demetri's arm cast, causing a lunchroom full of students to laugh at him, Yasmine does not look amused. instead, for the first time in the series, she looks concerned about another person. When she signs and counter-graffitis Demetri's cast later, it's the first act of kindness we have seen from her, and when Demetri tells her that he knows how she feels about being made fun of, her face lights up in a genuine smile. This later blossoms into an actual attraction.

Yasmine does not bully anyone throughout season 3, indicating that she's becoming a better person. However, she remains very prideful, saying that she would never date a "freak" like Demetri after she's caught kissing him by Miguel and Sam. However, even as she insults Demetri she makes eyes at him and touches his chest as she departs.

Losing her status has clearly taught Yasmine at least a little humility, and her concern for Demetri shows that she has also gained empathy as she was herself a laughingstock after her wedgie incident in Different but Same.

This article is a stub. You can help The Karate Kid Wiki by expanding it.

Moon is Yasmine's best friend. For most of season 1, both are part of the rude popular crowd. However, when Moon turns over a new leaf and advises Yasmine to apologize to Aisha, Yasmine expresses anger at her. After Aisha takes revenge by giving Yasmine a wedgie in front of everyone Moon is shown to be horrified.

While their friendship appeared to be strained by late season 1, Moon shows Aisha a picture of Yasmine in France in season 2, indicating that she's still friends with her. In season 3, the two are shown together and friendly, confirming they are still friends.

In season 3, the two are shown to be civil to each other.

Demetri is Yasmine's love interest. In season 1 Demetri expresses that he is attracted to Yasmine, but she looks down on him. Later in the season Yasmine looks disgusted when Demetri attempts to chat with her.

In season 3 Yasmine is initially rude to Demetri but begins to warm up to him upon seeing the dinosaur model he created for their group science project. After Kyler draws a penis on his cast Yasmine shows sympathy by signing his cast and telling him she now knows what it feels like to be laughed at since the wedgie incident. She looks visibly touched when Demetri sympathizes with her in return. Later she is caught kissing Demetri by Miguel and Sam, but out of embarrassment she insults Demetri and says she would never date him, although she gives him a flirtatious look and touches his chest before she leaves.

Kyler is Yasmine's former friend and now enemy (on her end). In season 1, both are a part of the rude popular crowd. In season 3, despite having no interactions, Yasmine is upset when Kyler bullies Demetri, as the wedgie incident she suffered in late season 1 has instilled some humility in her and made her realize she knows how it feels to be a laughing stock. It can be assumed that Yasmine no longer likes Kyler, due to her change in attitude.

Aisha is Yasmine's former bully victim. In season 1, she often bullies Aisha because of her weight. During the Halloween party, Yasmine posts a cruel pig meme of her eating Cheetos during the Halloween dance causing several people to mock her, which deeply upsets Aisha. Later in the season, when the Cobra Kai students crash Yasmine's party at the Canyon, she confronts Aisha, who tells her they were here first. Yasmine then insults her and walks away, only for Aisha to stop her and finally get revenge for the latter's constant bullying by giving her a wedgie in front of everyone, making several people laugh at her. Humiliated, Yasmine runs away.

In season 2, Aisha and Yasmine don't interact because of Yasmine being in France, but when Moon shows Aisha a photo of Yasmine in France, Aisha angrily says she should stay in France.

When Yasmine returns to school in season 3, she is still being mocked for the wedgie incident; afterwards, she voices her disgust to Moon about the nerds running the school, and asks Moon if Aisha is the queen of this. Moon says Aisha transferred schools after the fight, causing Yasmine to express approval. Later in the season, when Demetri finds himself being bullied by Kyler, Yasmine shows him sympathy by telling him that she has known the feeling of being the laughingstock since the wedgie incident.

Interestingly, both Yasmine and Aisha indirectly helped each other, as Yasmine's constant bullying led to Aisha joining Cobra Kai, which eventually helped her stand up for herself and get revenge on her, while Aisha giving Yasmine a wedgie taught her humility and to be a more nice and empathetic person.

Although Yasmine does not know Johnny, she is an indirect catalyst for his renewed rivalry with Daniel, as well as many future events.

In season 1, Yasmine crashes her car into Johnny's Pontiac Firebird in a parking lot. An enraged Johnny screams that Yasmine, Moon and Sam, scaring them as a result and causing Yasmine to drive away. Johnny's car winds up being towed to Daniel's auto dealership for repairs, resulting in the two old rivals seeing each other for the first time in many years. While Sam shows guilt over what happened, Yasmine rationalizes that the dangerous-looking, scruffy man would have chained the three girls up in his basement.

Despite not interacting with Johnny since the accident, this accident ls indirectly a reason that Johnny's rivalry with Daniel is renewed. This accident is also an indirect reason for Johnny's life after. 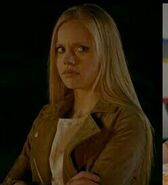 Retrieved from "https://thekaratekid.fandom.com/wiki/Yasmine?oldid=26364"
Community content is available under CC-BY-SA unless otherwise noted.